The KCChuggers was formed a number of years ago and today it continues to be a dynamic and active club sanctioned by both the Model T Ford Club International and Model T Ford Club of America.  The KCChuggers is much more than a bunch of people getting together to talk about old cars.  Throughout the year the club hosts and participates in a number of activities.  These activities often involve the members driving their vehicles on 'road tours'.  These tours sometimes are held in a single day and only range for a few miles, while other times the tours are for several days and can range to the hundreds of miles.  Not everyone drives their Model T on a tour.  Some people choose to drive their 'modern' vehicle, but they still participate in the activities of the tour along with other members.

Please click the button below to see where and when the club's monthly meetings are held. 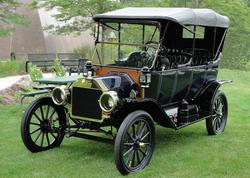 Shortly after the year 1900 rolled around, Henry Ford and others were transforming the very fabric of civilized life.  In the horse and buggy era, people traveled at a rate of only about 10 miles and hour, which meant that a 50 mile trip was a day long ordeal, so it was almost never ventured.  Although Ford did not invent the automobile, he is credited with taking it from a rich mans' luxury, to the average mans' necessity.  With the Model T the world opened up for many people.  The thought of speeding down the road at 35 miles an hour, was to the people in 1910 what the flying car of the Jetson's seem to us today.

Although every Model T is old. that does not mean that they need to be treated like museum pieces.  When you look at the ingenuity and workmanship that went into a Model T you realize that a Model T today is a living and breathing example of moveable art.

Why Join Our Club

What is so special about a model t?

The Model T was the culmination of development by Henry Ford and his team to provide safe and affordable transportation for "the great multitude".  It was first manufactured in October of 1908, and production continued until May of 1927.  During that time there were fifteen million automobiles produced.  It has been more than 85 years since the last Model T was produced.

We Want to Preserve the History of These Treasures

We feel that one way to preserve the history of the Model T is to restore them, learn about them, and quite importantly... drive them!  People are often surprised to realize that a machine made more than 100 years ago is still out there, chugging down the road.

We Learn From Each Other

We, as a group, are always learning about some aspect of the Model T.  By being a part of the KCChuggers means that there will always be another member who has experience in some area of expertise than another person might not possess.